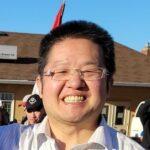 I am Dr. Daniel Nagase.

As a doctor, I see first hand how building a society on false foundations results in sickness of both the body and mind. Solving the problems of where the medicine I learned in Canadian Medical School has gone wrong starts with correcting the very foundations of society itself. Peoples of the Salmon presents the correction of society from a false structure based on the pursuit of money, to a just structure built on stewardship of the earth, the source of all prosperity.

When medicine is built on true foundations, then true health becomes possible. When profit is no longer the goal of society, then the evils women and men have suffered, under the Canadian medical establishment, can be brought to justice and prevented from happening again. Never have doctors pushed their patients to take an experimental drug with known harms on a global scale. By removing this injustice, and the system that created it, one neighbourhood at a time, one city at a time, one nation at a time, we can bring truth, prosperity and freedom back to this Earth.